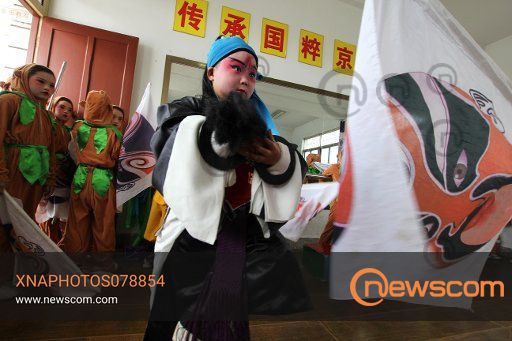 Find Similar Images
(110428) -- NANTONG, April 28, 2011 (Xinhua) -- Cheng Bin improvises along with his peers in the Peking Opera course in Nantong, east China's Jiangsu Province, April 16, 2011. The ten-year-old Cheng Bin is a pupil of the Chenqiao Primary School, a small rural school in Nantong. He and some 200 pupils of the school started to learn Peking Opera when they are in the first grade. When attired in various costumes, moving with agility in thick-soled performance boots and colored greasepaint on his face, Cheng becomes a powerful "magnet" that attracts the audience. Despite his increasing popularity among the audience in east China's Jiangsu Province where he was born, the chubby boy has his vexations, not least his 37.5-kg body weight which is unbecoming to his age and his 1.29-meter height. In the eyes of others, Cheng Bin is a lovable Humpty-Dumpty. However, obesity has posed an obstacle in his pursuit of becoming a professional Peking Opera actor. Each time when he attended Peking Opera course in which action trainings were given, Cheng would have to make greater efforts than his fellows. During a training session which usually involved rolling, jumping, kneeling and doing horizontal splits, Cheng would be soaked in sweat two or three times. "The boy has a talent for stage performance, good understanding of the characters and fine vocal conditions. He will have better career prospect if he loses weight," says Li Pengshan, a famous actor who chose Cheng as his disciple when the kindergarten boy's performance impressed him in 2006. With the possibility of failing to realize his dream looming large, Cheng made up his mind to battle against obesity and a series of tough moves have been taken since April. He went on diet and gave up greasy and spicy dishes he used to love; he walked four kilometers to school and back home each day; and he did various physical exercises after school. Cheng's mother is a worker in a brewery in Nantong and his father works for a local construction company. In March of last year, the couple planed to break off their son's Peking Opera course, which are in conflict with his primary school education. But they eventually changed their mind. "We are really thankful to the instructors who devoted so much to our son and we are also touched by our son's determination," says Yang Lihong, Cheng's mother. "The best we can do is to offer full support." "If you want to achieve something, you must first conquer yourself." The line from the film "Farewell My Concubine" is Cheng's motto. Last August, Cheng was awarded second prize in a provincial children's Peking Opera competition in Jiangsu after beating over 300 competitors. In May, 2011, he will be taking part in a national-level children's Peking Opera competition held in Nanjing, capital of east China's Jiangsu Province. (Xinhua/Huang Zhe) (lmm)(mcg)
Location: NANTONG, , CHN
Post Date: Apr 28, 2011 12:50 PM
TAG ID: xnaphotos078854 (RM)
Credit: Huang Zhe / Xinhua News Agency/Newscom
Format: 5184 x 3456 Color JPEG
Photographer: Huang Zhe
Release Status: No Model Release, No Property Release
Please submit a licensing request for pricing on this usage.
$login_splash 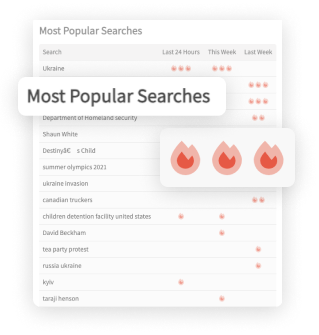 We've added new search and curated content to help you "find it" on Newscom even easier. Here are a few search improvements now implemented within Newscom 3.2: